Freezing rain began falling yesterday and has turned much of Oklahoma into a deep freeze. Broken limbs and fallen trees have blocked roads and snapped power lines. Most of Tulsa is without power– officially described as 200,000 households, which sounds pretty darn close to the whole city to me.

Our bad day started last night when the power blinked off about 10:00 pm. The mist turned to drizzle and the sheen of the trees coated with ice became obvious. Jackie and I turned in for the night (what else is there to do with no light, heat or Internet connection?). But it wasn’t long before the eerie hum of self-destructing transformers and rolling thunder woke us. By 4:00 am the crack of nearby trees relenting to the burden of frozen water played like a symphony. Then a loud crash on our own roof sent us scrambling for our Maglites.

The 40-year old oak trees in our front yard had transformed into sinister mortars in a matter of hours. The sound of a splitting limb would send ice and wood smashing onto the roof. Each time our roof was pounded by a rain of ice and limbs we tensed. Would that be all? Or would another large branch fall and cause the entire house to shudder? All the while we grimaced because the roof was only a year old.

By 6:00 am I was fed up with shock and awe so we made a run for our nearest Panera. We absorbed large amounts of coffee and naively assumed the worst was over. The power was still out but new day promised above-freezing temperatures. We returned home after a couple of hours to find more large limbs had fallen, one poking right through the roof into our kitchen. 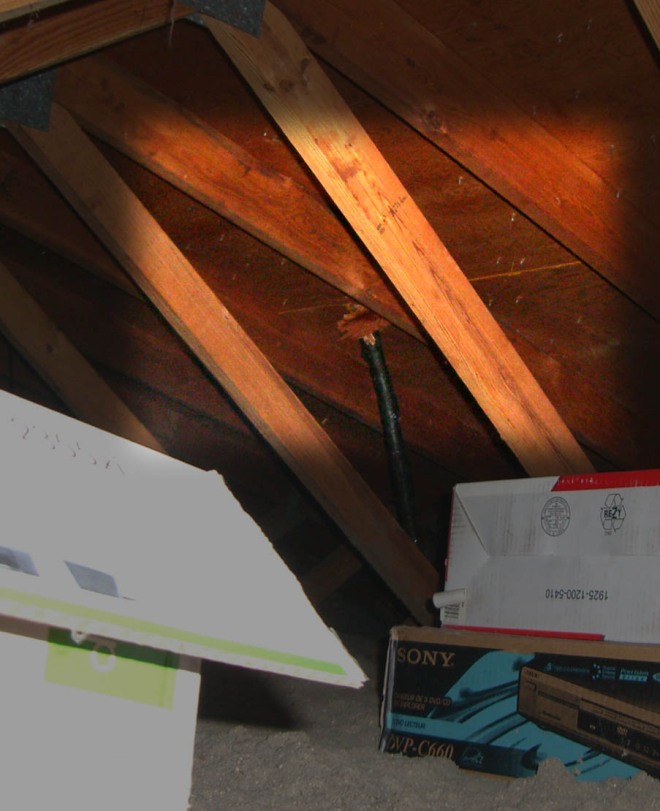 Fortunately the puncture was pretty close to the attic access in our garage. I was able to saw off most of the limb where it poked through our roof’s decking and put a plastic tub under it to catch any rain that dribbled through. I tried to push it out of the hole but it was much too heavy. Later that day a couple of entrepreneurs stopped by handing out flyers for their tree service. They were looking for future customers, I asked them if they wanted some work right now. They cut off the offending limb and nailed some shingles over the hole.

We’ll see how the patch holds up overnight. The forecast for Tuesday is scattered thunderstorms.

Coming home the other day I noticed an odd sight in a neighbor ‘s drive. This guy must have really wanted a three-car garage.

I’m not sure how they managed to get up enough speed, in the short length of a driveway, to cause this much damage. Not only did the Ford crumple when it slid its bumper under the white Buick, it pushed the nose through the garage door!

I was going through some old photos last week.

This was a bit of magic marker art using a Datsun 510 as the canvas. Some may know the canvas as the “Buck Car.” That’s mostly because it was spray painted on the hood in letters three feet tall.

About a million years ago I used to draw this character on various fixtures around Tulsa. One included a caption I borrowed from local bumper stickers of the time, “I’m mad too, Vince.”

From then on everyone called the cartoon by the name Vince.

The real Vince was a guy who ran for street commissioner about a zillion times. I ran into him once at Jerry’s Restaurant (formerly on 15th and Main) and we chatted over apple turnovers. When I asked him about the slogan he laughed. He had borrowed it from a politician in the Houston area who had popularized the slogan “I’m mad too, Eddie.”

And now you know.

The Insects T-Shirt!Okay, gang. Here’s the Insects appearance on the Night Shift television show in its entirety. Complete with closed captioned lyrics!

The video previews appear in the order the songs were played on the show. My apologies for the low resolution- but they’re good enough to get the general idea.

A couple of weeks ago I got an email from Steve Liggett, the art magnate who runs Living Arts in downtown Tulsa. He was going through some old photos and found one of me and some co-horts circa 1986.

That’s me on the right accompanied by Les Mobley (left) and Geoff Williams (center) as we’re sipping Tecates during a sound check at Club Nitro. Les played drums and is now a fixture with California alt-country sensation Red Meat.

Club Nitro was on 6th Street just east of Peoria and offered live original music and the latest alternative bands. Radio Milan played frequently at the Nitro (or Club Knifehole as some referred to it) until the finances got muddled. But that’s another story.

This photo was taken before a Radio Milan show that featured art between sets. We were oh-so ahead of our time! Anywho, that’s why Steve was there to snap said photo.

Most people that were at that show remembered it as The Night That Guy Stuck His Head in a Bucket of Mud. It would later come to be known as “performance art.”